Before leaving, I was interested in knowing, what are the specific challenges to introducing small-scale sustainable energy technologies in Ethiopia, for humanitarian purposes?

I met with the Horn of Africa Regional Network (HoA-REC/N), the Gaia project office in Addis, GIZ as well as the UNHCR. They were partners in several projects and shared their ideas with me.

The Gaia project, represented by Mekdes above,has spent 8 years working to introduce ethanol driven stoves both for the direct market in Addis but also in refugee camps. The UNHCR told me that the Ethiopian govnerment’s ban on the use of fire wood fuel was implemented last year, which has put an additional pressure on humanitarian actors to provide alternative fuels. Unfortunately, as was confirmed by Gaia, GIZ and HOAREC, the availability of ethanol is not yet high enough and kerosene is the only option left. However, kerosene has to be imported to Ethiopia and becomes a challenge to finance.

(a)    Purchasing sufficient ethanol, for the ethanol stoves, is a big challenge. The government prefers to mix existing ethanol production with petrol for cars.

(b)   The country’s total ban on use of firewood makes the use of fuel efficient stove unfeasible even though this has the highest user acceptance. Further, the ban on firewood use and recent arrests of refugee women have led to the refugees collecting firewood at night with the following security concerns.

(d)   Eucalyptus plantations are under the control of government agencies, and may choose to use plantation wood for own purposes.

(e)    Recipients of nice looking stoves and lamps often choose to sell them or trade them for other types of materials. For example, they can get 35 USD for selling a lamp which they have been given for free.

(f)    Stoves come from EU, US, India, through different INGOs depending on funding and earmarked for specific energy sources and directed at specific camps.

(g)    Rocket stoves and mud stoves are produced locally but cannot be done in high quality or high number when the funding is available.

Sensitive to location and ethnicity in camps:

(a)    Injera making. Injeras are large sized for Eritrean food, and small size in Somali cooking. Somali cooking is therefore easier to provide for with the ethanol stoves.

(b)   Eritreans like institutional stoves that are raised high and of good quality.

(c)    However, Somalis are not happy with stoves that are low on the ground or too high up (where the pot has to be lifted down). Also, they complain that they burn their hands while cooking the small injeras in the provided pots for the ethanol stoves.

(a)    There is normally no time for baseline assessment when an emergency occurs. However, it might be possible in the future to have a stack of different type of stoves and with available knowledge about different settings and ethnicities, to be able to choose more contextually fitting stoves.

(b)   New guidelines are under development, old ones are from 2003 and the new ones are expected to be completed within 2013.

As defined together with Ana Laura Santos, enterprises based in Europe face specific challenges when entering the emerging humanitarian market. In Ethiopia, I found that there are challenges within the beneficiary context that are both similar and also conflicting with efforts made by businesses and organizations operating from abroad.

For example, the strong push for handing over free, or low quality items such as solar lanterns damage the market potential. People’s perception on renewable energy technologies is alfa omega when trying to gain acceptance for these new technologies, so handing over items for free is not a good idea. Still, there is insufficient micro finance available for such projects so a revolving fund must be created. Gaia has been working on establishing a revolving fund together with the Former Fuel Wood Carriers Association (FFWCA).

Another problem is that while attempting to produce local stoves, the technical skills and the machinery is not availble for producing satisfactory quality. This is important, in order to keep the reputation for the stoves high and to ensure that retailers will keep investing in these stoves. The lack of ethanol supply seem currently the main obstacle for the stoves while availability of maintenance for products is the main obstacle for the solar projects. A HoA-REC/N/EU project is approaching this challenge by developing rural renewable energy projects in the Gambella region, which was called “virgin country” with the benefit that people’s perception of new technologies had not already been corrupted.  The regional centers will be independent entrepreneurs selling and doing technical maintenance on solar technologies.

GIZ has achieved good results with fuel efficient stoves together with the UNHCR. UNHCR has disemminated over 100 000 stoves in the Dollo Ado region. The capacity building among small scale enterprises in three waradas (regions) of Ethiopia has even resulted in some of the companies transforming from small scale to medium scale enterprises after having imported machinery to improve the production.

GIZ is also running additional lantern tests (see above image from the Addis Ababa GIZ office) and installing solar home systems for health centers in very remote areas. They are currently adding also social impact assessments. They say that local partners are increasingly focusing on the quality of solar systems and devices, for which GIZ is providing insights. Some local authorities are even banning shops if the products they sell are not satisfactory. However, there is an understanding that some items brought in by humanitarian actors are stored for too long before being disemminated, and that lack of understanding of how such items should be handled, results in products arriving on-site with depleted battery.

I look forward to return to Addis with two master students from NTNU in october 2013 .

I finish with a photo of some cooking solutions I found at a market in Addis, as well as the local market lighting solution. There is electricity access in Addis, still the retailers and capacity in solar lanterns and stoves is mainly in Addis, something which is a challenge to serving the high demand and request to protect bio diversity in remote areas. 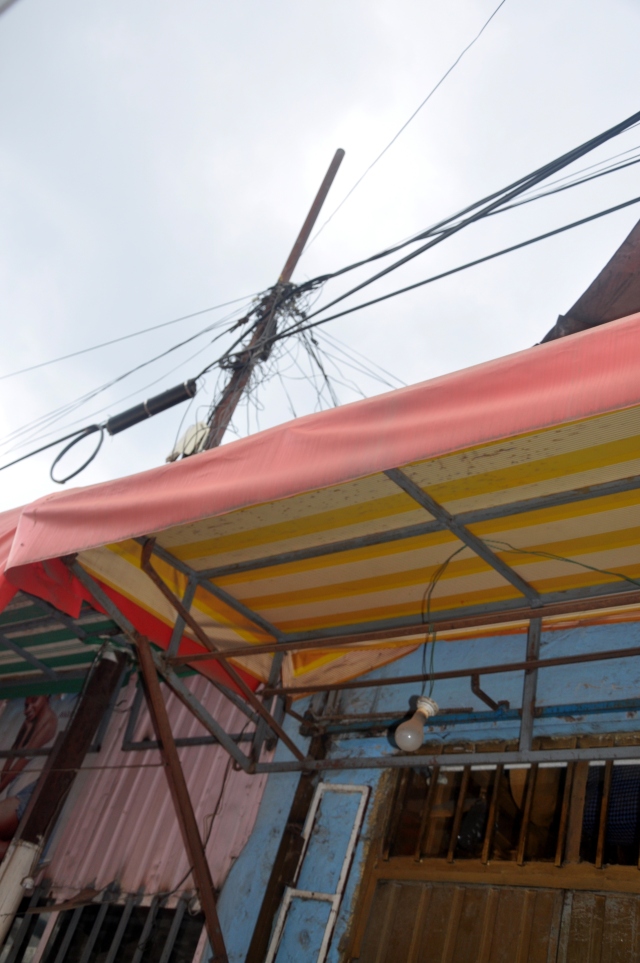 I'm a Postdoctoral researcher at the Norwegian University of Science and Technology. My focus is on Smart Energy Communities in urban settings as well as design of energy-devices for emergency settings and design for humanitarian markets, especially for refugee camps in rural areas of Africa. I blog about my research approach Design Thinking on www.designthinkingresearch.wordpress.com and about humanitarian design at www.designforselfreliance.wordpress.com . I am also a mother of a child who is deaf, and I blog about her language development on Aurorasittsprak.wordpress.com
View all posts by Brita Fladvad Nielsen →
This entry was posted in Cases, Energy, Refugee camps. Bookmark the permalink.